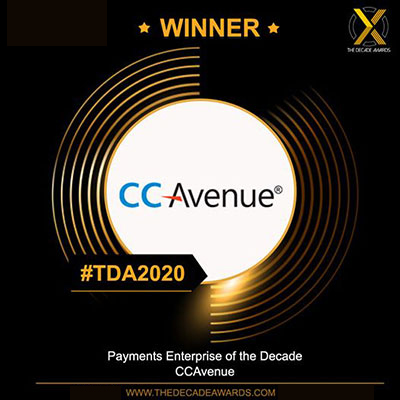 In acknowledgement of its stellar role in the Indian FinTech sector, Infibeam Avenues' flagship payments platform CCAvenue has been declared the 'Payments Enterprise of the Decade' at The Decade Awards 2020. CCAvenue was among the winners in the prestigious Apex Awards category along with renowned business leaders and reputed brands such as Mr. Mukesh Ambani, Mr. Deepinder Goyal (Founder & CEO, Zomato), Ola, Amazon and Netflix. The Decade Awards has been organized this year to recognize the achievements of champions across industry verticals for the period 2010-2019.

Since its inception in 2001, CCAvenue has acquired vast domain expertise that gives it the competitive edge in the ever expanding digital payments sector. Its robust hardware, scalable technology and best-in-class processes make transacting quick, secure and convenient for both online merchants as well as their customers. CCAvenue offers the highest level of security for digital transactions as it has achieved PCI-DSS 3.2.1 compliance and deploys advanced fraud detection and risk mitigation processes. The payments platform has served as the key catalyst of growth for innumerable ecommerce businesses spread across all major industry verticals, including online retail, real estate, hospitality, education, government, and telecom sectors. Over the years, CCAvenue has earned tremendous faith and goodwill of more than 1.4 lakh web merchants who avail its state-of-the-art payment gateway services.

Having successfully catered to the needs of Indian websites, CCAvenue has now taken its rich payment expertise overseas at a time when global players have been entering the Indian market. CCAvenue has established its footprints firmly in the Middle East through the rapid expansion of its business operations in the U.A.E and the Kingdom of Saudi Arabia. Earlier this year, the company made inroads into the United States of America by offering its vast array of digital payment solutions to a large number of web and mobile-based businesses there.

Commenting on the win, Mr. Vishwas Patel, Executive Director at Infibeam Avenues Limited and Founder of CCAvenue, stated: "We are thrilled to win the 'Payments Enterprise of the Decade' award at this prestigious event. On behalf of the CCAvenue team, I sincerely thank the organisers, as well as the esteemed jury members for recognizing our numerous efforts and achievements in the digital payments sector. It has been a long and successful journey for CCAvenue, and we specially dedicate this award to our merchants and alliance partners who have enriched our platform through the years and without whom all this would not have been possible."